Your Hobby is our Passion

Trainz is a one-stop-shop for buying and selling model trains. We sell on several different marketplaces, including our Trainz.com store, eBay, Amazon and others. We have developed an audience of over 70,000 train enthusiasts. We list approximately 100,000 brand new and collectible train and hobby products on our Trainz.com store. As champions of the model railroading hobby we offer a huge selection of train parts and operate a train service center. 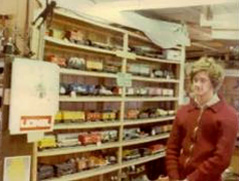 Scott and Milinda Griggs’ dreams of being at the center of the Model Railroading hobby has been on track for more than 30 years.

Scott has been a train enthusiast since he was 8 years old, when his father brought home several trains and set them up in the family basement—several types of Lionel trains and tracks. By age 18, Scott’s train business occupied most of his father’s two car garage, lining the walls with train-related equipment. He operated a model train repair shop and store, attended train shows, as well as ran classified ads to buy trains.

Right after college, Scott married Milinda and worked at a GE locomotive plant in Erie, Pa. Their passion for trains grew, converting their spare bedroom into a workshop. The young couple then moved to Cincinnati, Louisville, and back to Cincinnati before settling in Atlanta, where they began to lay the groundwork for their Model Railroading vision.

All Aboard for Growth!

By the mid-1990s, Scott and Milinda operated 2 train stores in the Atlanta metro area, generating annual revenues of around $1 million. Though the business experienced growth, it also faced turbulent times, yet the Griggs’ commitment to serving train enthusiasts continued to fuel their drive.

In the early 2000s, the Griggs began to leverage eBay for their train transactions—which turned out to be a smart decision. In April 2007, they purchased a 10,000-sq.-ft. facility with another 3,000 square feet next door, hired more full-time employees and the business expanded dramatically.

Today, Trainz boasts a talented, top-notch team and a best-in-class digital presence, with an online retail marketplace and model train consignment service as well as service and collectible train buying operations. Our passion for this unique hobby is transforming model train buying and selling, expanding our market share and connecting train enthusiasts across the globe.

Scott, owner and founder of Trainz, has been a train enthusiast since he was in elementary school. He has since transformed his passion into a multimillion dollar business, and the largest buyer of collectible model trains In the United States

From start to finish, Trainz provided outstanding, friendly service with its purchase of my O-gauge locos and rolling stock.  Carlie, the manager of the buying team, responded promptly to my inquiry, guided me every step of the way, and kept me well informed.  The company's free pick-up of my collection was another major, time-and-money saving benefit.  I was also quite pleased with the company's purchase price. In short, it was difficult to part with my trains after so many years of enjoyment, but thanks to Trainz I am confident they'll find a new home. Thank you!   Gordon P Former Superintendent The Port of New York & New Jersey RR Springfield, VA   Toot, toot!

Thank you for your many prompt updates involving my selling of "the last" of my model train collection. Your payment to me was very fair and even hit right on the button, the amount I thought would be right without doing any real research on any of the items. I was happy to provide to you the very best that I had saved to the very end and I hope you make a nice profit on everything - your company is the best, most fair, and most customer service attentive of any firm I have ever dealt with for any service or product. Thank You!

When it came time for me to move to a new city, I had to sell the remainder of my trains. Unfortunately, I wasn’t able to afford a larger home for my layout. My experience with Trainz during the sale of my collection was nothing short of spectacular. Communication was excellent. The agreement made regarding payment for my trains was followed to the letter and I received payment for my trains as promised. I was very happy with the transaction.

I just wanted to send you a note of thanks.  When my father made the very difficult decision to sell his train collection, a hobby he had enjoyed for close to 50 years, I was not sure how to help him.  My internet search landed on your web site and I am so grateful it did!  You helped make this process much easier than I had anticipated and put my father at ease with the knowledge that his collection was going to someone who cared!

I have used Trainz over the years for both buying & selling trains and have found their people to be knowledgeable and easy to work with.  The process Trainz has in place to buy back trains is both quick and easy.  They will give you a fair price on your entire list of trains, rather than selling and shipping them one at a time.  Trainz is a great one-stop shop for both buying & selling trains.

It was an absolute pleasure dealing with your company.  Everything went very smoothly with the sale of my trains and I appreciate your professionalism.  I will be sure to spread a positive response to my friends that are train enthusiasts and have been following my deal with you.  I will always consider Trainz for purchases and sales in the future.”

I have been wanting to thank you for the informative notes about the train sales and of course the checks! You and the Trainz staff are doing a great job, and I appreciate all of you. I also am very glad that Roger's trains & scenery will be enjoyed by those who are passing along their love of model railroading.

Chrissy,Thanking you and Trainz for each and every step in this buying transaction and that my check will be coming soon.If you ever need my input on my selling thru Trainz just let me know.It has been a pleasure!!

Again thank you for purchasing the train collection.  If someone asks me about selling their train collection, I will recommend your company.  It has been a pleasure doing business with you

Let me thank you for doing a very professional job of finding new homes for my equipment.  I will recommend Trainz highly to other hobbyists I may meet who need to sell their own layouts.

I can’t thank you enough for such a great experience in working with you all.  You made a tough process for my family a very easy one to go through and we very much appreciate it!

Please extend my thanks to everyone who took part in the selling….  Was quite pleased with how everything was handled.  Will use you again if the opportunity arises.

I have meant to thank you for the pleasure it has been to work with your company. I know that as I decide to sell more of my collection I will contact you.

I have been selling my trains to Trainz for over a decade.  I find their buying service is honest, with a fair price offers when I had trains to sell.

Thank you both for all your help with making this as seamless as possible. I’ll highly recommend your services to anyone that may need them.

I will not hesitate to recommend Trainz to other enthusiasts, as everyone involved made the whole process fairly easy for me

You are wonderful to work with.  I will miss emailing you now that all of my items are sold.

Thank you so much, for all you and your wonderful people have done.

Wow and awesome!  Trainz is obviously very, very good at this.

I would like to thank Trainz for your professional service

I will definitely refer trainz.com to others.